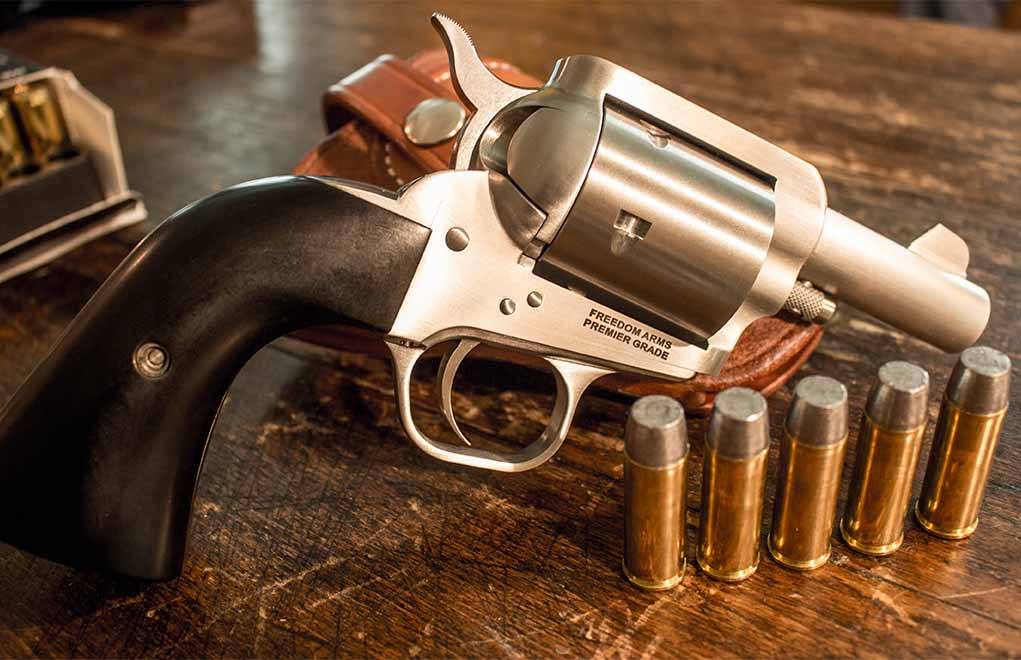 A specialty handgun, the Freedom Arms Model 97 ‘Packer' is equally practical in its purpose (it can save your bacon) as it is elegant to handle and shoot.

I have been surveying land since I was 11. I’ve spent an awful lot of time in the rural, remote areas of New York in all seasons and am very familiar with both the fauna and flora. Undoubtedly, the populations of deer, bear and coyote have increased significantly, and while there are few instances when I’ve been truly concerned, there have also been some instances that stand out.

Perhaps a decade ago, a young man working as summer help was supposed to be about 100 yards away, giving me a backsight in order to turn the angle to the forward station. Instead, I saw him taking giant steps toward me, his face as pale as if he’d just seen a ghost.

When I inquired as to why he was “here” when I needed him “there,” he stammered, “Bear—and more than one!”

When I took a look at the tracks, I realized that the young man had ended up between a black bear cub and its mother. While it’s difficult to prove a negative, I was happy he vacated when he did.

I began the search for the ultimate camping/fishing/utility handgun, something light enough to carry inconspicuously on a camping trip or while trout fishing, yet powerful and accurate enough to stop a threat, whether from the two- or the four-legged kind. There are many solutions to this problem and, as so many fishing guides have testified, you’ll carry the gun a whole lot more than using it; but when you need it, you really need it.

However, I recently found a neat, little revolver that fits perfectly in my hand, balances and shoots well, and brings more than a bit of style to the affair: a Freedom Arms Model 97 Packer.

This cool wheelgun uses the frame, grip and cylinder of the FA Model 97 but features a 2½-inch barrel, without ejection rod. With a stainless steel finish and black Micarta grips without any checkering, the Model 97 Packer makes a powerful little package. It’s available in .357 Magnum (with the possibility of buying an additional cylinder in 9mm Luger), .44 Special and .45 Colt (with an additional cylinder available for purchase in .45 ACP).

I chose the .45 Colt for this review because I felt it gave the most flexibility. The classic configuration of the .45 Colt uses a 255-grain lead bullet at somewhere around 800 to 850 fps from a 7½-inch barrel, and that load will certainly suffice. Modern firearms such as the Ruger Blackhawk and, most certainly, the Freedom Arms can handle much higher pressures and will generate much higher velocities.

I’ve pushed the 300-grain jacketed Hornady and Sierra bullets to 1,250 fps in my Blackhawk, and while the five-shot cylinder of Freedom Arms will absolutely handle these pressure levels, the short, 2½-inch barrel will not obtain those velocities. The ability to drive a 300-grain bullet, even at a reduced velocity, is a good thing … especially when your concern is a toothy predator at distances measured in feet.

Equipped with a transfer bar in the hammer, the Model 97 Packer gives the hiker, camper, fisherman and gentleman a single-action revolver with five shots (a full cylinder) designed to put out fires—the Packer is designed for close-quarters work. It carries very well, taking up little more room than my S&W Model 36, and it isn’t at all cumbersome on the hip. I find the grip design and angle of the many clones of the Colt SSA to be very natural, probably because I grew up shooting my dad’s old Ruger Single Six and then graduating to that Blackhawk.

The Model 97 Packer comes equipped with fixed sights, having a rear groove and a front blade; you will immediately notice that the front sight is way too high to hit anything. Well, there’s a reason for that: Freedom Arms ships its fixed-sight handguns with a front sight that’s designed to be filed to the proper height, depending on the load the user prefers. With such a short sighting radius, the accuracy results of the Model 97 must be taken with a grain of salt. I certainly got saucer-sized groups at 5 yards, which is plenty for what this gun is designed for: saving your bacon when the threat is literally in your face.

At the range, the Model 97 Packer immediately lets you know it’s a short-barreled revolver in both muzzle jump and report. It is loud—seriously loud—but then, again, this is the case with most short-barreled guns. And I will admit that it does jump, especially when being fired with one hand. It’s not unbearable, nor is it unruly to shoot; it just takes a bit of getting used to. (I do feel that some extra practice is warranted when shooting this gun one-handed, because you could find yourself in a situation where your weak hand might be occupied warding off blows or bites when the need to draw this gun is presented.)

The Choice Ammunition 325-grain load certainly makes the muzzle jump, but physics are physics, and if you’re delivering nearly 900 ft-lbs. of energy from a gun that fits in the palm of your hand, you’ve got to give up something on the other end. Keep in mind that this is four times the energy of a 158-grain .38 Special load driven at 800 fps. This load is a serious stopper, because those flat-nose, hard-cast bullets give a whole lot of penetration, especially when the velocities are on the lower side.

One would think the velocities delivered from a 2½-inch barrel would drop right off the charts in comparison to the 5½- and 7½-inch models, but when I ran the Model 97 Packer through my Oehler 35P, my eyes widened … and stayed wide.

I tested three loads: Winchester’s 225-grain, bonded, jacketed hollow-point, Choice Ammunition’s 250-grain, round-nose, flat-point load and Choice’s 325-grain, wide flat-nose with gas check. The Winchester load claims a muzzle velocity of 850 fps; the Packer delivered an average of 740 fps. The Choice 250-grain load is listed at 820 fps (the classic loading for the .45 Colt), and the stubby Packer gave an average velocity of 755 fps. The heavy, 325-grain, hard-cast bullet load from Choice (its Bear Load), was labeled at 1,200 fps. However, the short-barreled Packer spits that big slug out at 1,105 fps, for 880 ft-lbs of muzzle energy. Not too shabby for such a short handgun.

If I had to find faults with the Model 97 Packer, I could come up with two.
The first is the thickness of the grips at the top. They tend to be a bit thicker than I care for, but this is a matter of opinion. The other issue I have is the lack of an ejector rod, but I think the mentality of the design can be explained.

To paraphrase Chris Sells (of Heym USA fame), the inclusion of an ejector rod capable of reaching the base of a spent cartridge would require a longer barrel … and thereby defeat the point of the gun. You might need a small stick (I’m thinking a “tactical” chopstick could be cool) to push out the spent cartridges (I found the 700- to 800-fps cases fell out, but the hotter loads tended to be a bit more sticky; and I would highly recommend keeping the cylinder as clean as possible in order to facilitate easy case removal).

As Sells and I discussed, the purpose of this gun is to be a concise piece—capable of getting you out of trouble quickly and effectively—with the reliability of a single-action revolver, made in the bank-vault fashion for which Freedom Arms is famous. I can say that from the first time you cock the hammer on the Model 97 Packer, you can tell immediately that you’ve got something serious in your hand and that no corner has been cut in material or construction method.

Bringing the hammer into half-cock and then into full-cocked position emits a clear and audible click and gives a positive feel under the thumb. Spinning the cylinder shows how tight the tolerances are on a Freedom Arms revolver, and the metalwork is very fine. While the Model 97 Packer bears no fancy engraving, gold inlay or grips of rare material (Sells does report that laminated wood, sheep horn and ivory will be available as upgrades—but only in Texas), it exudes the reliable function of a gun that, if anything, has been overdesigned.

Being completely honest, the Freedom Arms Model 97 Packer is expensive—but so are a great many things in life. It’s a specialty handgun for those who appreciate the strongest designs in a firearm and enjoy carrying them. They can most definitely be handed down for generations. It’s equally practical in its purpose as it is elegant to handle and shoot.
If you’ve developed a penchant for Freedom Arms guns, the Model 97 Packer will give a familiar feel in a compact package that’s perfect for a number of situations in which a smaller handgun is warranted.