Solid on performance and reasonably priced, the Ruger P345 is not new but it is an autoloader any serious handgunner should check out.

Through my decades-long involvement with the shooting sports I have noted a trend.  A new centerfire autoloading pistol is introduced with a lot of fanfare, and it appears on the covers of magazines.  The articles inside tout its function, accuracy, durability, and ergonomics.  The cycle is repeated with a new model, and the previously praised pistol passes into oblivion.  I guess that is progress, and seems to stand as one of the rules of American marketing, but some models should not be forgotten.

Introduced almost exactly six years ago, the Ruger P345 is just such a pistol.  Ruger’s first .45 auto, the P97 was introduced in 1997 and was praised as a durable, compact lightweight piece that featured a polymer frame.  One published test even claimed that 5,000 rounds were fired in one without a failure of any kind.  But the P97 was thought by some to be ugly, and it was not considered to be the equal of a SIG, Glock, Kimber, or a 1911 clone. 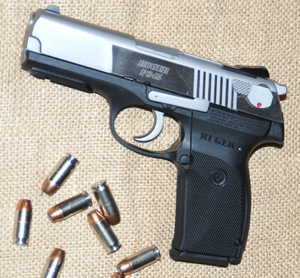 I have had mine for about seven years and have never had a misfire or stoppage of any kind.  The good news is that it cost me exactly $350 at the time I bought it new.  No, it is not the most elegant autoloader I have.  That title belongs to a Smith & Wesson 4506.

But time marches on and Ruger replaced the P97 with the P345 in 2004.  Although there are similarities between the two, there are also many differences.  The P345 has three features that make it in compliance with restrictions in states that are unfriendly to handguns.  First, it has a loaded chamber indicator.  When a cartridge is in the chamber, a small bar pivoted at the rear is forced upward so the leading end rises out of a recess in the top of the slide, and two red dots and the word “loaded” become visible.  Second, the P345 has a magazine disconnect so it will not fire with the magazine removed.  Third, there is a key-activated lock that is accessed through a hole in the right hand safety lever when the safety lever is in the on position.  These safety features bring praise from some and disdain from others.  Many shooters will ignore the first two and never activate the third.

The exterior appearance of the P345 shows significant improvement over that of the P97, which does look somewhat like a blob.  The P345 is slightly thinner and weighs 1.5 ounces less than the P97.  The grip of the P345 has a better configuration than that of the P97, and has molded in sharp checkering rather than a slick surface.  My P97 has worn a Hogue Handall® sleeve for years, but that won’t be necessary for the P345.

Some years ago, I had admired the P345 from a distance, but when I held one I knew it was just a matter of time.  Did I need the P345?  Absolutely not, but since I interact well with most firearms, it seemed necessary.  When I talked to my favorite dealer who also owns and runs the range where I shoot, the price he quoted made me realize that I had made the right decision.

So now that I have both a P97 and a P345, my impression is that they get no respect, but they certainly deserve it.  The P345 feels as good in my hand as does any other autoloading pistol.  At 29 ounces, it rides easily and points quickly.  Being only 7.5 inches in length, it is a compact pistol but still features a 4.2 inch barrel.  My old Ruger is the P97DC with the decocking levers, but the P345 has dual safety levers that also function as decocking levers.

Sights on the P345 are low and they can be moved laterally for windage adjustment.  White dots on either side of the notch in the rear sight can be aligned quickly with one on the rear face of the front sight.  The P345 is currently available with either a blue or stainless steel slide mated to the black polymer frame.  To me, it has the most eye appeal of any Ruger autoloader yet.  The grooves on the slide are sharp and give a good grip, and the conventional styled hammer is much more comfortable to the thumb than the style found on the P97 that had a sharp edge at the top. World history has included the Stone, Bronze, and Iron ages, we are now in the Polymer Age.  We now have plastic bumpers for cars, plastic joints for knee replacement, and plastic frames for handguns.  Advanced composites are so versatile that most manufacturers of handguns produce models with polymer frames.  Ruger has done this quite successfully with the P97, P345, and other models.  The result is a durable, lightweight pistol that has excellent ergonomics and durability.

Why is the P345 not more highly regarded and in greater demand?  I do not believe it lacks durability, reliability, looks, or accuracy because it has all of these in large measure.  Perhaps it is because the Ruger name was so closely identified with .22s, single-shot and bolt-action rifles, and single-action revolvers for so long.  Entering the highly competitive centerfire autoloader market rather late made Ruger the new kid on the block and shooters who had used other brands for so long simply turned noses upward and yawned.  Moreover, some of the Ruger models, quite frankly, lacked the refinement of some competitors, and there is a plethora of models from which to choose.

For many of us, the question of how a pistol performs is paramount.  Having always been pleased with my P97, I am pleased to say that the newer P345 performs at least as well and possibly better.  However, with a handgun held in quivering hands and sights aligned by imperfect eyes, accuracy is more an aspect of the shooter than of the handgun.  However, the accompanying photo shows a couple of the three-shot groups made by my P345 that measure less than 2 inches at 25 yards.

The Ruger has sufficient accuracy for any application that is appropriate for a pistol of this type.  The assessment of durability will have to wait until I do a lot more shooting, but function has been perfect with both factory ammunition and my handloads.  To date, the best accuracy has been with a 230-grain Rainier Ballistics bullet pushed by 6.1 grains of Alliant Unique.

Is my Ruger P345 the equal of my S&W 4506?  Absolutely not, but I am not sure what .45 autoloader is.  But with the MSRP of $577 and $617 for the blue and stainless versions, the P345 should be considered as a competent, relatively inexpensive autoloader for defensive uses.

The usual retail prices are about $100 below the MSRP, and I consider the P345 a very good value.  It comes with two magazines, a magazine loader, a large external lock, and a hard case.  Centerfire autoloaders are the hot handguns so I just hope that the Ruger P345 gets the respect it deserves before it becomes one of those highly praised pistols that passes quietly into oblivion.