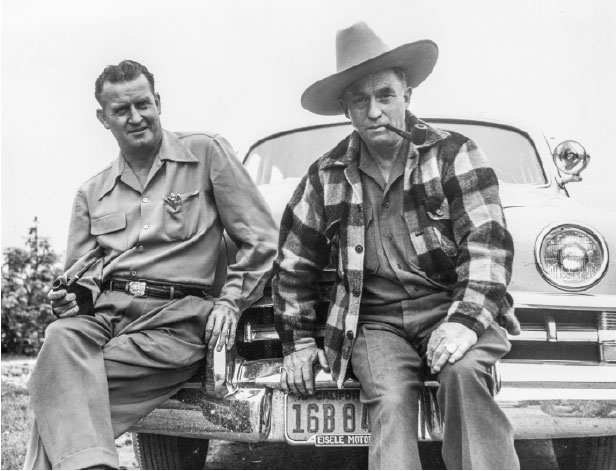 Arguably the most important gun writer of the last century, Elmer Keith, sometimes referred to as “the Father of the Magnum,” is still influencing the gun world. This time, the occasion was a firearms auction held by James D. Julia, Inc., where Keith’s collection of firearms recently went up for auction. And the prices paid bear strong testament to Keith’s continued importance.

According to Francis Lombardi, Department Head of Julia’s Firearms Division, one of the first guns up was the most famous of all of Elmer Keith’s handguns, a customized Colt SA Army revolver referred to as “The Last Word” in handguns. Bearing Serial No. 5, beautifully engraved and custom designed by Keith and Harold Croft, the Colt came to the auction block with a presale estimate of $30,000 to $50,000. Yet, after a furious bidding battle, it went out at $80,500!

A pair of Smith & Wesson hand ejector First Model (triple-lock target revolvers with holster rig) owned by Keith was conservatively estimated at $6,000 to $10,000, but they blew through the high estimate to bring nearly $40,000.

Keith was a renowned big-game hunter, and his collection included many double rifles that accompanied him on various hunting safaris. The most significant or historic gun was unquestionably the W.J. Jeffrey Grade 2 best box lock double rifle that at one time had been owned and used by hunting legend Jim Corbett. During his lifetime, Corbett killed 44 man-eaters, two of which accounted for killing and devouring over 800 people. His trusty double rifle was estimated at this sale at $75,000 to $150,000. But the rifle flew well beyond the high mark to approximately $265,000.

Firearms owned by the late Norm Flayderman, an expert in antique and collectible firearms and their values, were also offered. Items included a scarce Civil War brass frame revolver with holster presented to 1st Sgt. Wm. Ahrberg/Co. E 16th K.V.C. The gun carried a modest estimate of $2,000 to $4,000, but it went out at over four times the high estimate for $17,825.

This brief appeared in the August 2015 issue of Gun Digest the Magazine.