Want to get the most out of your .30-06 Springfield loads? Check out these tips for handloading this classic hunting cartridge.

What are some basic tips to keep in mind when reloading the .30-06 Springfield?

The .30-06 Springfield remains one of our most popular hunting cartridges, even 110 years after its introduction. It’s a cartridge that can effectively use the full gamut of .30-caliber bullets, and, as you’ll soon see, is rather easy to load for.

There is plenty of good .30-06 brass on the market, even when times are tough, and .30 caliber is one of our most popular. While the .30-06 has been produced in just about every action form conceivable, from single shots to autoloaders to pumps, the bolt actions are the most popular.

If you’re loading for a bolt gun or single shot, you may take full advantage of the neck sizing technique, but for the autoloaders, slides and any other action, you need to full-length resize your brass. How To Get Started Reloading
A good set of dies, such as the RCBS full-length resize and seater dies, and an RCBS No. 3 shellholder, will do almost everything you need. The .30-06 runs on a standard large rifle primer, like the CCI200 or Federal No. 210, though I actually prefer the Federal Gold Medal Match GM210 primer.

The ’06 has a case length of 2.494 inches, and I trim all my brass to that length — even the new stuff (some new brass will actually run a touch long) — and I give all the case mouths a good chamfer and deburring.

For powder choices, the Ought-Six will run on a multitude of powders, from the faster burning powders in the IMR3031 range, to the mediums like IMR4064, IMR 4451 and Reloder 15, to the slower burning IMR4350 and Reloder 19 and 22. The last group of powders is where I’ve found the best velocity and accuracy with most bullets. I like Federal and Norma cases for most of my loads.

Like I said, the ’06 isn’t a difficult prospect to reload. I’d like to share some of my favorite loads, some that have proved themselves in more than a few different rifles.

Disclaimer
I’m going to put this out there now, and you’ll see it many times in my column: Regardless of the load data I share with you, you must start at the bottom of the load data in your reloading manual and work your way up slowly, looking for pressure signs. You can’t just hop in at the data listed; it may not work well in your rifle, and all barrels are different. 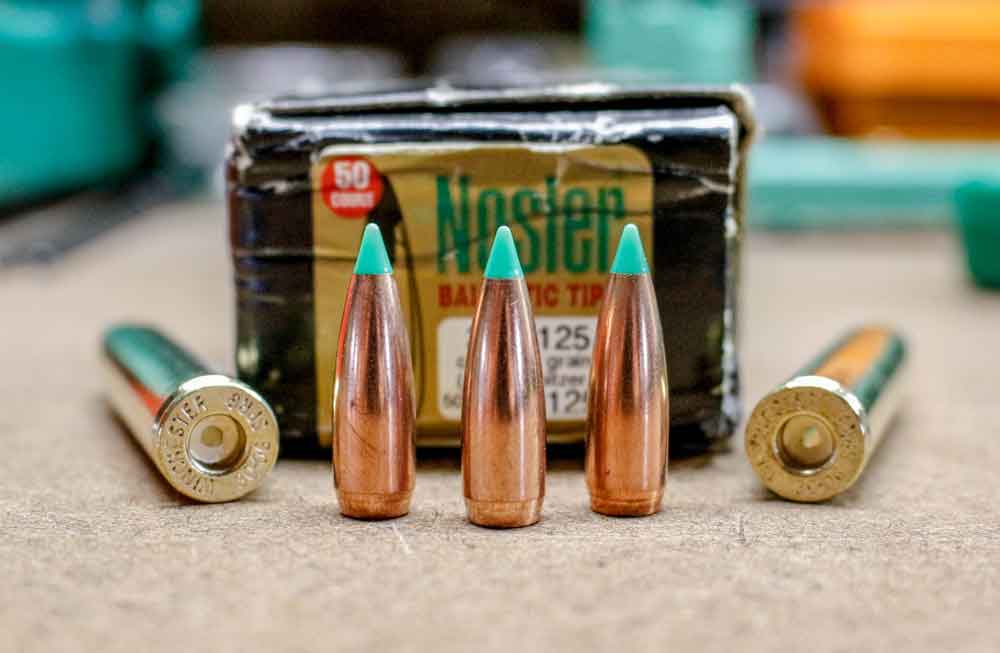 Favorite Handloads
With a 125-grain Nosler Ballistic Tip, a perfect choice for coyotes and other varmints, I like to seat it over 55.0 grains of Alliant Reloder 15, for 3,275 fps. The Nosler Ballistic Tip is an accurate, if frangible, bullet, and this load has printed ¾ MOA in many rifles.

The 150-grain bullet makes a good long-range choice for the ’06, especially with a premium bonded-core bullet. The Swift Scirocco II is one of my favorites, having a good, long ogive and an effective boat tail, in addition to a nice polymer tip to enhance the BC, often having a retained weight of 85-90 percent.

Seat that Scirocco to 3.340 inches (the maximum Cartridge Overall Length for the .30-06) over top of 61.0 grains of Reloder 19 for 2,950 fps and a rather flat-shooting combination. This makes an excellent deer/sheep/antelope load.

The 165-grain bullets make a great all-around choice for most of our North American hunting, as well as a great African plains game bullet, if properly constructed. I’ve used a couple with good results. 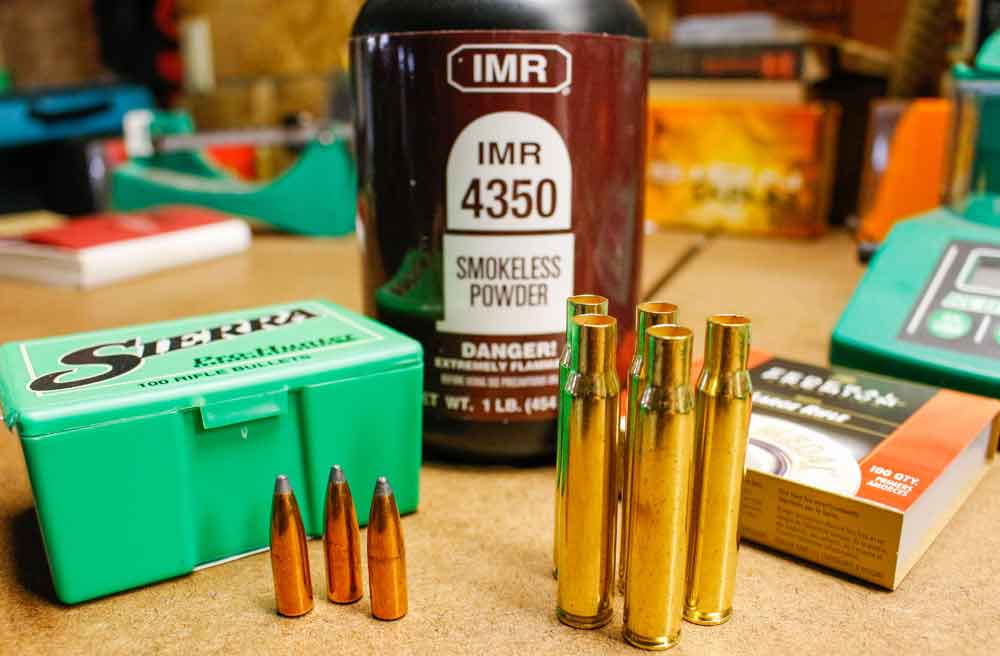 The Sierra Game King boat tail hollowpoint is a fantastic bullet for deer, bear and elk. I know, you’re thinking hollowpoint, and therefore extremely frangible, but the Sierra bullet has a thick jacket and is capable of handling even magnum impact velocities. I’ve used it on deer for years in a number of .30-caliber cartridges with nothing but fantastic results. It has shined in the .30-06 on top of 55.0 grains of IMR-4350, with a CCI200 primer, giving an even 2,700 fps at the muzzle and sub-MOA accuracy in a number of rifles.

The 165-grain Nosler Partition is another favorite in the .30-06, and when mated with 57.0 grains of Reloder-19, sparked by a Federal GM210M primer, it makes a good choice for deer, elk and much of the African plains game. I’ve measured it at 2,725 fps to 2,750 fps, depending on the rifle, and it’s really hard to argue with the performance of the Nosler Partition.

The 180-grain bullets are the staple in the .30-06, and there are a ton to choose from. I’ve used a pair that actually worked very well with the same powder charge.

The Sierra 180-grain ProHunter, a flat-based spitzer, and the 180-grain Swift A-Frame, a flat-based semi-spitzer with a partition and a bonded core, both gave great accuracy and good velocity when sitting atop a load of 54.5 grains of IMR4350 and ignited by a Federal 210 primer. The Sierra came out at 2,650 fps, while the Swift A-Frame came into the world at 2,680 fps. This combination could easily account for 95 percent of the world’s game, and that’s one of the beautiful features of the .30-06 Springfield.

For heavier game, the 220-grain slugs make a good choice, especially at short to medium ranges. The .30-06 can push the heavy bullets up to 2,500 fps, but I found the accuracy at 2,400 fps on the button. A Hornady 220-grain round-nose InterLock over 52.0 grains of Reloder 19 gave groups of just under one-inch at 100 yards. Not too shabby for such a big slug, and good for just about anything you’d use a .30-caliber rifle for. 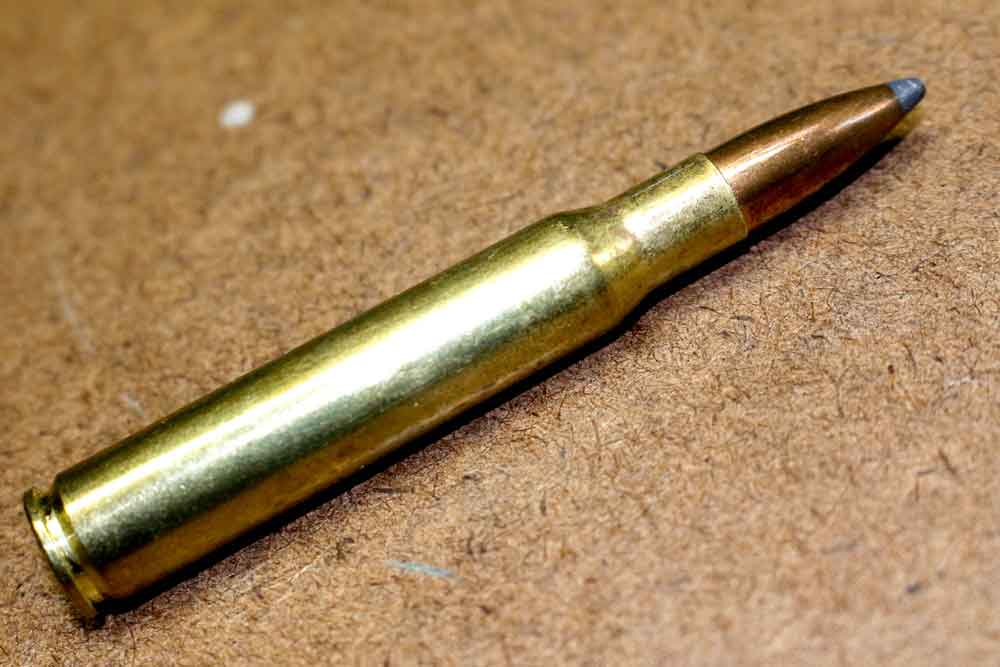 Final Considerations
While there are those that would argue with me, I don’t crimp bullets for the .30-06 unless I’m loading for a semi-automatic; I feel there’s enough neck tension to keep things in place. If you want to crimp, you can set the RCBS seater die up to give a good roll crimp, but be sure your bullet has a cannelure, or you’ll damage the bullet and have some serious feeding issues.

One last caveat: There are many good sources for military ’06 brass on the market, but be careful when using them; the military stuff has a thicker case wall, and therefore a smaller combustion chamber, and it will reach higher pressure with less powder when compared to the commercial cases.