Gun Digest
Home Gear & Ammo Ammunition How To: Tips For Reloading the .223 Remington

The .223 Remington is a highly versatile cartridge that can be loaded to meet the shooter’s exact needs, but there are certain considerations to keep in mind.

What are some important things to know when reloading the .223 Remington?

We are all fully familiar with just what a useful cartridge the .223 Remington is; whether you enjoy varmint and predator hunting, or just have a good time target shooting with an MSR, the .223 fits the bill. For a handloader, the .223 Remington can prove to be extremely versatile, especially if your rifle has one of the faster twist rates, like 1:8-inch or 1:9-inch, so you can take full advantage of the heavier .224-inch caliber bullets.

Depending on your rifle, you might want to take a couple different approaches to your reloading technique. Loading for the ARs — and any autoloader for that matter — might warrant the use of small base resizing dies, to shrink any fired brass back to specs, all the way to the base of the cartridge, for proper feeding. If you don’t get a good resize with a standard sizing die, the resulting jams can be a nightmare.

If you’ve chosen a bolt gun, you might want to take advantage of the neck-sizing die for the best concentricity and accuracy potential. I’ve seen neck-sized ammunition shrink group sizes by half or better in some instances, and if you want to wring every last bit of accuracy potential out of your bolt gun, this technique might work well for you. Keeping Cases In Mind
But, before we get ahead of ourselves, let’s look at the cases themselves. One of the obvious allures of the .223 Remington is the fact that it’s been a military cartridge for nigh on half a century, and with that comes the availability of surplus military ammo and cases.

That military ammunition (5.56 NATO) generally comes with cases that are thicker than the sporting variety, and because the outside dimensions of the case can’t change, the inner dimensions — read as combustion chamber — is smaller. That will increase pressure, sometimes to a dangerous level, so you absolutely need to sort your cases prior to any load development.

Both sporting and military cases can be used, but with different powder charges. What I do, to take advantage of both types of cases, is to use my military brass for a different powder/bullet combination, so it won’t get confused with other loads.

Bullet Options
The .223 has a rather wide selection of bullets to choose from, so depending on your application, there will be a bullet for your needs. Bullet weights run between 30 and 90 grains, so there’s not only a bunch of flexibility here, but also multiple powders to fuel all those different bullets.

Twist rate is also going to play a big part in the equation. If you have a rifle with one of the slower twist rates — the 1:12-inch twist, like the .22-250s use — you’ll be limited to the 55-grain bullets, maybe a 60-grain bullet, but anything heavier than that probably won’t stabilize.

Varmint Hunting
For the varmint crowd — we’ll use prairie dogs and woodchucks for an example — lighter bullets work perfectly, permitting high velocities, and as long as ranges aren’t crazy, they’re manageable in windy conditions. The 40-grain Nosler Ballistic Tip Varmint can reach over 3,500 fps to truly generate the red mist. I like Hodgdon H322, H335 and VARGET for bullets of this weight.

If you prefer a heavier bullet, say 50 grains, the same powders will suffice, but you’ll see a moderate velocity reduction, with speeds right around 3,200-3,300 fps. But, the increase in ballistic coefficient figures will make distant shots much easier on a windy day.

The classic 55-grain pills are a good all-around choice for any hunting — they offer a balance of downrange trajectory and wind deflection values — and will give excellent accuracy. Hands down, I’ve had the best results in both bolt guns and autoloaders when using H335 with 52-, 53- and 55-grain bullets. Add a match-grade primer (I like Federal’s GM205M small rifle primer), and you’re looking at some very serious accuracy. My dad’s Savage rifle, with a healthy bull barrel, will put Sierra’s 52-grain MatchKings into tiny little groups when seated above a proper load of H335. Long-Range Shooting
If you like to play the long-range game, I’d recommend using the longest bullets with the best ballistic coefficient possible. The 68-, 77- and 80-grain match bullets have some impressive figures, as well as performance, just so long as your rate of twist can stabilize the longer projectiles.

With the increased length of these bullets, case capacity can be compromised, so I like to look to the ball powders; and this is another reason I’ve relied on H335. However, Hodgdon’s new CFE223, optimized for the .223 Remington cartridge and including the Copper Fouling Eraser, is another solid choice for heavier bullets. Norma 203B, normally reserved for bigger cases, can also be a wonderful choice for heavier bullets like the Hornady 68-grain Match and its ilk, as can IMR 4895.

Hunting
The longer bullets, designed with terminal performance in mind, can also be used for optimal hunting performance on big game with the .223, though you’ll want the higher sectional density figures as well, to ensure penetration.

The 62-grain and 75-grain Swift Scirocco II, with a good, thick jacket and boat tail, and a polymer tip to initiate expansion, makes a good choice for a hunting bullet. The 70-grain Hornady GMX, a sweet monometal spitzer bullet, will fit the bill perfectly as well, as there is no jacket or core to separate. All of these will take up room in the case, much like the longer match bullets, so keep an eye on load density, so as not to break the grain structure by over-compressing the powder charge. 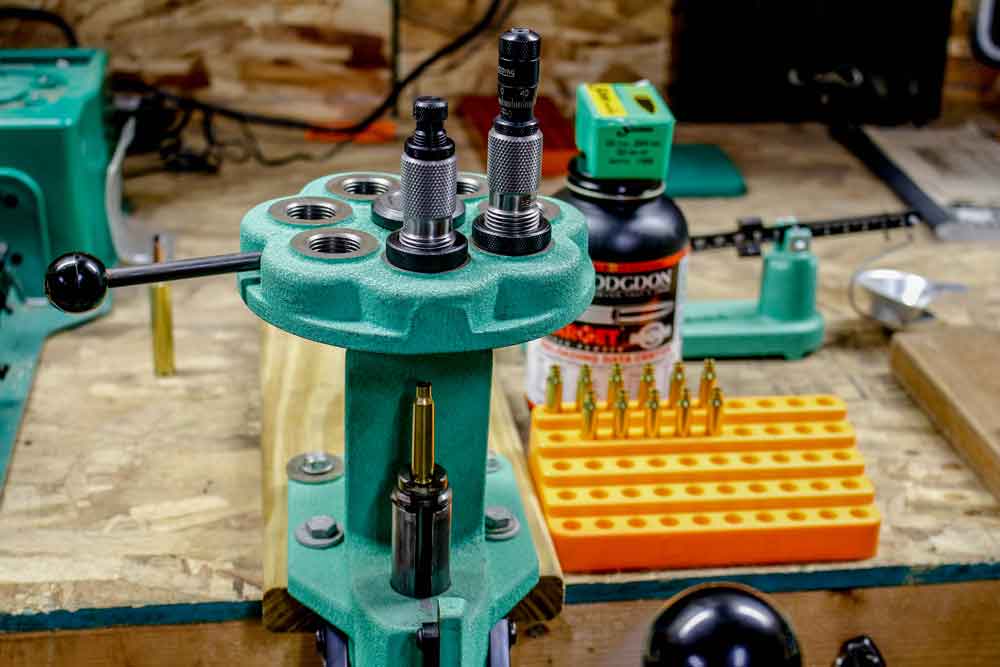 Parting Thoughts
Although it’s important with all cartridges, I firmly believe the .223 Remington is a cartridge with which pressures can quickly rise to unsafe levels. I strongly suggest, and it applies even more to the heavier bullets, that you use the data for the particular bullet, from the bullet manufacturer, as the conformation and construction of the bullet can have a dramatic effect on pressure levels and powder charges.

If you’re loading for one of the autoloaders, look to Redding’s bushing die to keep the proper amount of neck tension on your ammunition; this will avoid the tendency of having bullets pull out of the case slightly during the loading process. I don’t really like a roll crimp for the .223 Remington, as there is enough neck tension to keep things in place for the bolt guns.

The .223 is one heck of a versatile cartridge when equipped with a barrel with the proper twist rate. While I have often said I feel it’s a bit light for a deer rifle, and that there are many better choices, I certainly wouldn’t stay home if it were the only rifle available to me.

It is, most definitely, a top-notch coyote rifle, and, if the small-bore target game is your thing, it can be extremely accurate. Grab a good set of reloading dies, a rifle you believe in and some components for experimentation, and you’ll have countless hours of enjoyment with very little recoil.

Editor's Note: This “Reloading Bench” column is an excerpt from the July 2017 issue of Gun Digest the Magazine.