An eminently flexible cartridge, the .375 H&H Magnum is suitable for a wide array of species.

All-around cartridge.” Three simple words, yet the fuel for campfire arguments heard ‘round the world. It’s a subjective phrase; and the answer truly lies in what your shooting or hunting situation dictates.

To some, it may be the .270 Winchester or the .30-06 Springfield, maybe a .300 Winchester Magnum. But if you enjoy hunting the largest creatures on earth, you may need a little more, in terms of both bullet weight and bore diameter; even in the large-bore circles, the same argument will rage.

Undeniably, the .375 H&H Magnum will certainly pop into that conversation, as it represents two things: first, a cartridge that can take any game animal that walks, and second, the recoil produced by this cartridge can be at the top end of a shooter’s tolerance. I’ll be the first to admit that the .375 H&H has some wonderful factory ammunition choices — I absolutely love the Federal Premium Trophy Bonded Bear Claw load, as well as the Norma Oryx 300-grain load — but it truly comes to life when handloaded. It is very flexible as a caliber; there are bullets available weighing from 235 grains up to 350 grains, and they are all very useful in the hunting fields.

One of the beauties of the .375 H&H Magnum is this flexibility: It can be used on deer and deer-sized game, it makes an excellent bear gun — irrespective of species — and handles all African game, including elephant. Common bullets weigh 235, 250, 260, 270, 300 and 350 grains, and all have their place in the hunting world.

I’ll illustrate some examples of my favorite loads and loading techniques, from lightest to heaviest. All my .375 H&H Magnum loads are sparked by a large rifle magnum primer, and I use the Federal Gold Medal Match GM215M almost exclusively for this cartridge.

NOTE: Make sure before trying any of the loads I’ve listed, that you consult your reloading manual and work your way up from the minimum, checking for pressure signs along the way and stopping should you find dangerous pressures before I did.

Among the 235-grain bullets, I like a couple specifically.

The 235-grain Speer HotCor is an affordable and effective practice tool, especially for someone who wants to become familiar with the H&H without all the recoil. It’s been tried in the field and has shown to be extremely frangible, even on deer. 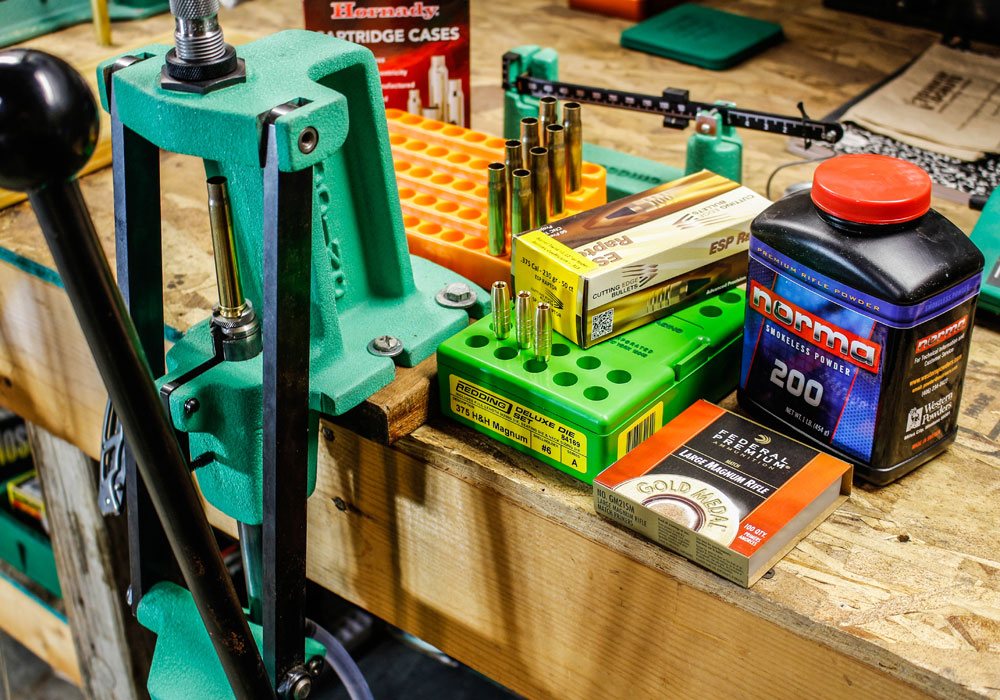 The 235-grain Cutting Edge ER Raptor is an extremely effective hunting bullet, and when seated over a load of 61.0 grains of Norma 200 powder, will yield a muzzle velocity of 2,800 fps in a surprisingly easy-to-shoot combination. This load has been used for numerous plains game species — kudu, sable, warthog, zebra, wildebeest and more — as well as whitetail deer. It’s flat shooting and makes a perfect companion to the 300-grain loads.

The 250- and 260-grain bullets also make a good choice for lighter and medium game.

I’ve used a 250-grain Sierra Game King, over 67.0 grains of Hodgdon’s Varget, for an accurate and effective African plains game load, neatly taking gemsbok, hartebeest, reedbuck and steenbok; I’ve even used it for caribou, far up into Quebec.

The Nosler 260-grain AccuBond is in the same class — though it may fly a little flatter than the Sierra — and has also proved its worth and would make a great choice for elk and moose, or for distant eland and kudu. Seat that bullet over 71.0 grains of Alliant’s Reloder 15, and I’ll show you how much my Winchester 70 likes this load, putting three shots into ¾ inch, at a muzzle velocity of 2,680 fps.

I like the Hornady 270-grain InterLock, as I like many of the InterLock bullets, and I think it makes an excellent choice as a black bear load. Spire point, flat base, cannelure for crimping if you so choose, and enough structural integrity to hold together at moderate velocities, the 270-grain InterLock is an accurate and affordable bullet. My rifle likes the same load I use for the 260-grain AccuBond — 71.0 grains of Reloder 15.

This brings us to the 300-grain slugs, which are possibly my favorite among the lot. One of the beauties of the .375 H&H Magnum case is its ability to put different bullets to the same point of impact, within reason.

My .375s, especially the Legendary Arms Works Big Five, likes just about any 300-grain bullet over a load of 77.0 grains of IMR4350, and I mean nearly any bullet of this weight.

Though the load is within one grain of the listed maximum, it doesn’t seem to matter about bearing surface or lead core versus monometal; the gun just shoots this load. Soft points, solids, it doesn’t seem to matter — I’d pick a new bullet and work the load up from the bottom, and lo and behold, there would be the accuracy. Some of the longer monometal bullets may pose an issue with load compression, but I’ve been able to make it work with all but the longest designs.

If you’re not comfortable with the compressed load, my second choice for the 300-grain bullets would be IMR4064, but IMR4350 is my favorite. Depending on the bullet, that accuracy would run from ¾-inch three-shot groups to 1¼-inch groups; more than enough for a hunting rifle, and especially for a .375 H&H.

My favorites among the 300-grain bullets are the Swift A-Frame, Peregrine BushMaster, and North Fork semi-spitzer. Any one of the three would make an excellent choice for a Cape buffalo. Switch to a well-constructed solid, and you’ve got good elephant medicine, and a good choice for hippo. Most of my 300-grain loads run at or about 2,525 fps.

Case preparation is an important part of the process with the belted case; make sure you keep a good eye on the area just north of the belt, as this is where the most stretching occurs. I keep my cases trimmed to an even 2.850 inches, to match any and all new cases.

I’ve also found that the .375 H&H Magnum has enough neck tension that crimping is not necessary. It’s quite fine to crimp if that makes you comfortable, and a good seating die will give a good roll crimp — I like the Redding seater die’s crimping — but I really don’t crimp my .375 H&H loads often.

The firm of Holland & Holland gave us what I consider to be one of the few cartridges that are truly universal. I’ve used it all over Africa and North America and wouldn’t hesitate to take it on any hunt, anywhere.

The potency and flexibility of the cartridge is undeniable. It will run a diverse selection of powders, and with our modern bullets, it becomes even more versatile.

Purchase The Components Used In This Article: