Find out the .30-06 ammo that gets the more than century-old cartridge shooting with the best of them.

More than 100-years and still going strong, the .30-06 Springfield is doing something right. The legendary cartridge has gone from warhorse to match champion to big-game hunting standard, leaving a trail of success little other rifle fodder can match. Maybe the 7mm Mauser—maybe.

An untarnished crown, riflemen will keep the .30-caliber on its throne for the foreseeable future. Especially given the ammunition advancements of recent decades. At no time in the history of metallic cartridges have shooters enjoyed better propellent, projectiles and primers—not to mention damn uniform cases. Even the cheap stuff is leaps and bounds better than premium options of a generation ago, making for a golden age of shooting.

Have no doubt, long-in the tooth as it is, .30-06 ammo has benefited from these technological surges every bit as much as the ever so trendy metrics.

While the Springfield is at once one of the most versatile, forgiving and rewarding cartridges to handload, there’s also a slew of good factory-loaded ammunition available if you don’t happen to have a reloading bench. And .30-06 ammo runs the gamut, from bone-crushing big-game medicine to hair-splitting match competitor. All you need do is find the option to make your rifle sing.

A word on that final thought—it’s easier said than done.

Even with ammunition more reliable, accurate and consistent than ever before, not every load plays nice with every rifle or shooter. Some might produce too much recoil for a marksman to perform to his pinnacle, others might not have the optimal velocity for a rifle’s barrel length, and still others might simply not match up to a rifle’s idiosyncrasies. It takes time to find the right fodder to get your rifle running like a thoroughbred.

This leads to one main point—plan on testing a wide spectrum of .30-06 ammo in various bullet weights. Yes, we’re giving you suggestions in our buyer’s guide below, but just because we’ve had success with a certain type of ammo doesn’t mean you will. Give yourself and your .30-06 the best opportunity to succeed and take the time to seriously put your ammunition under the microscope. Come your next match or hunting season you’ll be glad you did. Story goes, John Nosler kept plugging a moose, but the old cup-and-core bullets just wouldn’t penetrate to the vitals. Frustrating, but the genesis of one of the modern era’s projectile breakthroughs—Nosler Partition bullets.

Adding a copper partition two-thirds of the way through the core ensured the soft-point bullet would still expand at low velocities, but wouldn’t fragment at high velocity. Great idea. 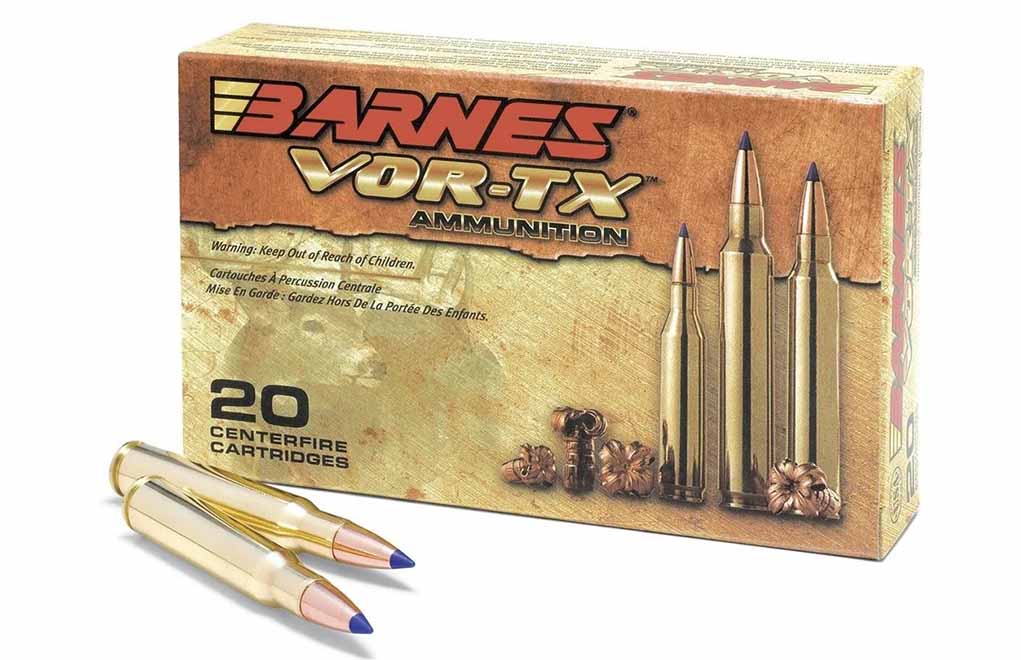 In corners of the country, lead ammunition is verboten. Thank goodness, monumental projectiles have come into their own, not to mention gotten a bit more affordable.

A leader in this corner of the market, Barnes offers a top-shelf hunting option for the .30-06 Springfield topped with its TTSX bullet. Essentially, it’s a polymer-tipped, boattail rendition of its standby TSX bullet, delivering excellent ballistics—both in flight and terminally. In the case of Barnes’ .30-06 ammo, it’s a 150-grain load (3,000 fps MV, .440 BC) that’s a legitimate mighty mite. Don’t let the bullet’s weight fool you. Thanks to its solid structure and hot velocity it holds its own against the 180 class. Additionally, the load is a bit more polite in the recoil department. barnesbullets.com Study the .30-06 Springfield for any amount of time, you come to realize it can go the distance. That is, the cartridge is a downrange performer that some contend outdoes other .30-calibers, such as the .308. Regardless, the old standby is more than capable of those long cross-canyon shots on once-in-a-lifetime bulls when loaded right.

Few other .30-06 ammo options better fit this bill than Federal’s Berger Hybrid Hunter. Living up to its name, the bullet delivers match-level accuracy thanks to its cutting-edge hybrid tangent-secant ogive. Yet, boasting a thinner jacket than Berger’s competition stock ensures it expands once at its terminal destination. 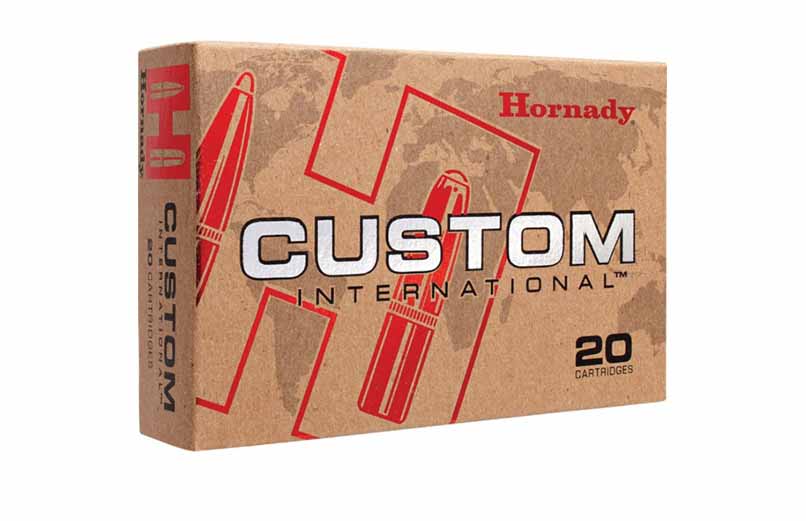 Pioneers of polymer-tipped bullets, the company has excellent choices in this corner of the market. But for hunting everything in North America short of coastal brown bear it’s difficult to beat ‘Big Red’s’ Custom International ammunition loaded with InterLock bullets. True enough this is a bit of a teaser, given these are only available on the international market outside the US—Hornady used to offer them in its Custom line. That said, it makes them no less effective and worth mentioning.

Season in and out these babies perform. Sure, you give up a few points in ballistic coefficient, marginal at most hunting ranges. But in return, you get among the toughest non-bonded-core, non-partition bullets on the market. The 180-grain SP load (2,614 fps MV, .452 BC) is a do-all, fit for almost any large game. For tougher fare—short of dangerous game—the 220-grain RN (2,365 fps MV, .220 BC) offers incredible energy transfer and devastating expansion. hornady.com

A brief note on .30-06 ammo meant for competition, most of it is milder than you’d expect. This is a function of the M1 Garand maintaining its place in matches, even gaining in popularity in recent years. Stout as the rifle is, it wasn’t constructed to handle the pressure spikes of modern ammunition.

In many shooters' opinions, you’re putting your operating rod in peril running hot loads through the old warhorse. To be fair, there is debate over this issue. Corey Graff has an excellent essay on M1 Garand ammo if you’d like to get a better idea of the situation.

No matter what, especially with M2 Ball (150-grain, 2,700 fps MV, .405 BC appx.) ammo surplus dwindling, study new factory ammo before running it through your Garand. Most will explicitly say it’s loaded for the rifle. And if you’re looking for .30-06 match ammo for your bolt action, don’t be scared away by some of these choices’ somewhat pedestrian velocities—they’ll hit the mark. 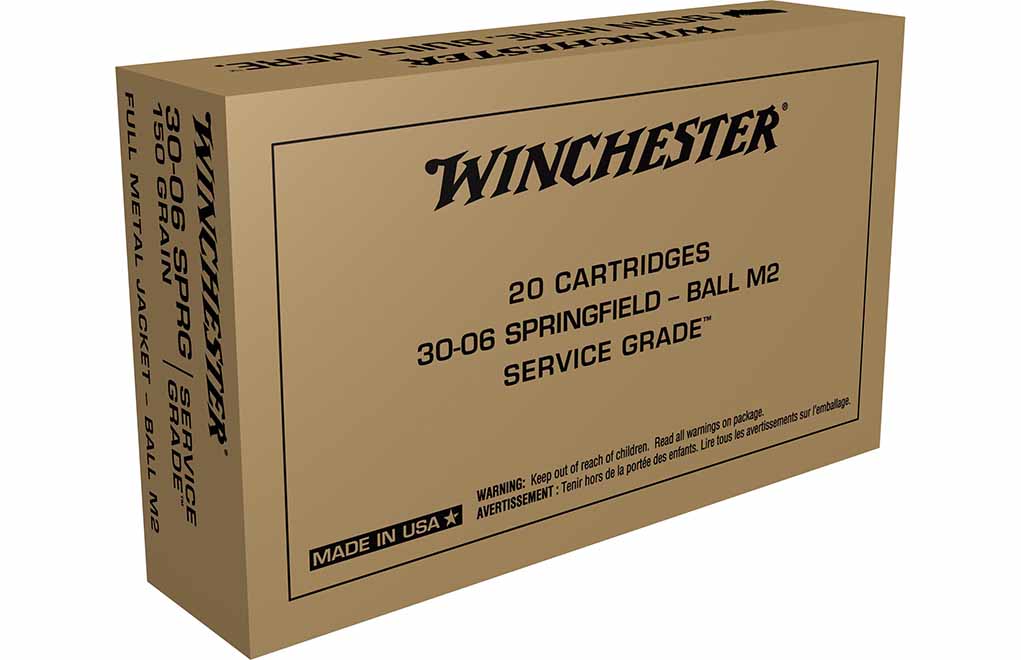 Winchester pushes the velocity a touch with this .30-06 ammo, but the 150-grain option (2,740 fps MV, .420 BC) nonetheless performs. Best of all, the FMJ ammo is generally priced for the volume shooter. winchester.com 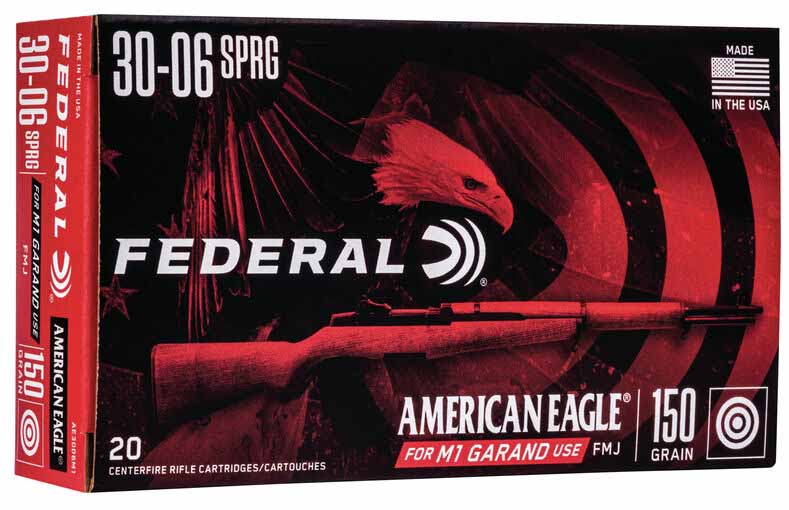 A stand-by label shooters trust, American Eagle has a specific load for the M1 Garand—you’ll know it by the picture of the rifle on the box. Again, the 150-grain ammo (2,740 fps MV, .410 BC) is loaded to protect your rifle, but a very concentric FMJ bullet ensures top performance. Watch out, American Eagle has another 150-grain .30-06 ammo option loaded decidedly hotter (see below). federalpremium.com A very well-balanced load that attempts to replicate M2 Ball down to the smallest detail. No surprises, that means a 150-grain FMJ bullet (2,700 fps MV, .498 BC), but one with better ballistic properties than surplus. The ammo is widely considered among the best option for those who play cautious with their M1. sellierbellot.us

There’s no need to be a slave to tradition if gold is on the line. Which makes Sig’s 175-grain Elite Match (2,700 fps MV, .496 BC) such intriguing .30-06 ammo. Among the heaviest match options available, the OTM bullets offer an excellent BC in explicitly M1-compatible, factory-loaded ammo. sigsauer.com If they only had Extremely Low Drag bullets back in the war… Hornady’s M1 Garand ammo boasts one of the most advanced bullets of any factory stuff for the rifle—the ammo maker's ballistic-tip ELD. The 168-grain load (2,710 fps MV, .523 BC) offers best-in-class performance and is just as good out of a bolt-action. hornady.com The perfect option for kicking your .30-06 bolt gun up a notch without breaking the bank. Typically, the 150-grain FMJ BT (2,910 fps MV, .408 BC) load is very affordable, so you’ll have plenty of fodder for reaching out. Watch out if you’re cautious with your M1 Garand—this was the stuff we warned about you earlier—it might not be the ammo you want to run through it. federalpremium.com Union Metallic Cartridge Company has produced .30-06 ammo perhaps longer than any other company. In short, it knows what it’s doing. There’s debate over if this 150-grain load (2,910 fps MV, .314 BC) is safe for the M1 Garand, given it’s plenty hotter than those touted for the rifle. For the safety of your rifle, the FMJ ammo is being classified as match here. remington.com