Created by duck hunters for duck hunters, the Browning Maxus is big on reliability, accuracy and power.

The very first sentence in the 2010 Browning catalog in reference to the company’s latest autoloading shotgun, the Maxus, is as follows – “The Browning Maxus – Maximum Reliability.” From experience, those five words certainly do say it all.

My first date with the Maxus was in Alberta in late 2008. Our group had, if memory serves me right, five of the new guns – a number which I believe represented, at that time, the whole of the population. Our host for the hunt, Browning’s Scott Grange, sheep-dogged his tiny stockpile of innovation with more intensity than did Golem guard The Ring.

However, at the end of our three-day stint north of Edmonton, there wasn’t a one of us writers who wasn’t plotting some way to sneak one of the Maxus’ back into The States. Yes, they’re that good.

A year later, Grange allowed me four days on the Great Salt Lake behind the recoil pad of a Plain Jane black-and-synthetic Maxus. Goldeneyes, pintails, mallards, widgeon, grey ducks, and bluebills all fell to the gun; so, too, did my first tundra swan and first drake cinnamon teal.

This time, the now year-old SKU was put through a brutal battery of field tests, including freezing cold temperatures, exposure to saltwater, and absolutely no maintenance whatsoever, and emerged with a report card sporting all As.

The catalog write-up goes on to list what Browning describes as the Maxus’ “innovative technologies.” Certainly, so-called such cutting edge technology can be nice and, at times, even useful. However, ‘tis often the case where one man’s innovation is another man’s gingerbread – or rather, fluff disguised as innovation. Fortunately, the latter is not case with the Maxus.

To me, the Maxus is without question the spawn of a waterfowler’s collective, a duck gun if there ever was a duck gun. A goose gun, too. In its purest form, the piece is a 3.5-inch gas-operated semi-automatic 12-bore; but it is more than that. 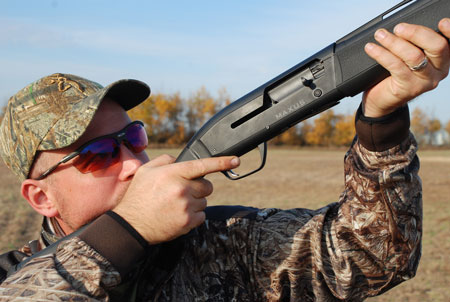 The Maxus’ efficiency begins where it should, with a trio of elements designed to enhance the gun’s on-target performance. Browning has combined their already-existing Invector-Plus choke system, with a lengthened (2.5-inch) forcing cone and back-bored barrel – the result being minimal shot deformation, and vastly improved pattern density, consistency, and uniformity.

These attributes are particularly noticeable when using larger non-toxic pellet sizes, and especially true in the case of steel shot.

Function for the Maxus is via what Browning calls their Power Drive System.

Elementally, it’s a port-and-piston design; however, oversized ports quickly bleed off excess gas with heavy loads, while a 20-percent longer piston stroke allows the piece to operate smoothly and reliably with the light stuff.

The unit itself is, for all intents and purposes, uniquely sealed, thus helping keep what my father always referred to as “mud, muck and corruption” out of the inner workings.

Recoil with the Maxus has been greatly reduced – An 18 percent reduction, as compared with other modern autoloaders – thanks to a combination of the Power Drive System, back-boring, and a space-age recoil pad, complete with what’s being deemed Inflex Technology.

Additional, if not novel features include an excellent trigger mechanism, Browning’s grip-tight Dura-Touch Armor Coating on all composite surfaces, a tricked-out Speed Lock forearm that eliminates the traditional threaded magazine cap, and a TurnKey magazine plug that allows for quick removal and/or installation of a two-round plastic plug.

The Maxus does sport the company’s decades-old Speed Load Plus feature, which automatically sends the first round in the magazine directly into the chamber. 26- and 28-inch barrel options are available, as are color schemes of matte black or Mossy Oak’s Duck Blind.

It’s no secret that to stay competitive, firearms manufacturers must continually introduce – pardon the cliché – new and better mousetraps. And if not the entire trap, at the very least a new twist or feature designed specifically to make you, the potential buyer, understand that life ends should you not purchase Product X.

This said, the Maxus certainly does sport a long list of so-called better mousetraps; some of which I find useful, and others, at least to me, are burnt umber where brown would suffice. First, the 3.5-inch chamber is lost on me. Yes, I know there are thousands of 3.5-inch fans out there; however, I probably don’t shoot five 3.5-inch shotshells annually.

I don’t like the expense, I don’t enjoy the recoil, and, finally, I’m of a mind that if I can’t kill it with what’s in a 3-inch hull, I probably shouldn’t be shooting at it in the first place. Still, to some the option to shoot a 3.5-inch shotshell is a bonus.

Both the Speed Lock forearm and TurnKey Magazine Plug, while nice enough features, are likewise personally moot points. Since working with my first in 1979, I’ve somewhat grown accustomed to a screw-type magazine cap. True, the Speed Lock forearm does allow for quick and easy sling installation; however, so too do modern caps, the majority of which come sling-ready from the factory.

As for quickly removing and then reinstalling a magazine plug, I again quote my father, a long-time semi-automatic man, as saying – “If I haven’t killed it in three, it’s probably getting away.” Ever since I can remember, our autoloaders, as well as our pump-actions, have been plugged out of the box, and have stayed that way for all time. I agree here with my Pop on his Three And Out theory.

So what do I particularly like about this piece? I could definitely see the positives inherent in the Maxus’ Lightning Trigger System; not so much in the mechanism’s speed, which is undeniably fantastic, but more so the fact that the whole of the trigger group is easily removed, thus making it easy to clean.

And while on the topic of cleanliness, the Maxus’ internal workings, i.e. the gas operation system, contribute greatly to an elevated ease of maintenance – a huge plus, especially for those somewhat frightened by gun oil and greasy rags. And once I got accustomed to it, the Speed Load Plus feature did prove convenient, particularly in the tight confines of a layout boat or ground blind.

What I like most about the Maxus are three things. One, the gun points and handles as if it were an extension of my own arms. Only one other off-the-shelf shotgun has ever fit me out of the box like the Maxus does, and that was a loaner Winchester Super X2 that I sent back to the factory because money was tight at the time.

Do I regret that decision? Without question. The second is the Maxus’ recoil, or more precisely, the lack thereof. Not only is the piece balanced extraordinarily well, but recoil, even with 3.5-inch shotshells, is negligible. Physical punishment is practically absent; so, too, is the target-to-target interruption common with heavy waterfowl loads, lighter guns, and oft-brutal recoil.

Third, and finally, the Maxus goes boom every time I pull the trigger, and this often despite both internal and external coatings of everything from mud and sand to sunflower seed hulls, Skoal drippings, and Dorito crumbs. It’s frighteningly reliable, plain and simple, and that, above all else, is what I’m looking for in a waterfowl gun.

This article appeared in the June 21, 2010 issue of Gun Digest the Magazine.