Not simply a tool of competitive shooters, the shot timer is the ideal instrument to sharpen life-saving handgun skills.

How Can A Shot Timer Help You Train To Defend Your Life?

In 1924, Ed McGivern set a world record by firing six accurate shots from a double-action revolver in 4/5ths of a second. An elaborate timing contraption attached to the revolver verified the event. Because of the wires, McGivern’s gadget did not lend itself to real-world application, so shooters continued to use stopwatches, sometimes even attempting to read 1/10th second divisions with a magnifying glass, erroneously assuming their reaction time was good enough to push a button that fast. This of course is impossible and results were not only a guess, but they were very dependent on the man running the watch.

The father of the “Modern Technique of the Pistol” and Gunsite Academy founder, Jeff Cooper, espoused the importance of speed in his motto: “Diligentia, vis, celeritas” — shortened to DVC — which is Latin for “accuracy, power, speed.” We measure accuracy on targets, power with mathematical calculations and speed with time. As it relates to shooting, time measurements are so small that a specialized device is necessary. In 1982, Ronin Colman, a shooter who attended the first American Pistol Institute (API) class ever held at Gunsite, created the PACT Championship Timer. Colman said that when he first introduced his timer to competitors at the World Shoot, all they wanted to do was try and break McGivern’s record. Since then, shot timers have become so trustworthy and prolific that they’re used to decide the outcome of shooting matches worldwide. Not only that, but they’re now very compact and affordable.

That said, competition is one thing and self-defense is another. In a life-or-death situation, time matters — but there will be no beep to signal when to draw, start shooting or reload. So, how can a shot timer help you train to defend your life? In the early ‘90s, when I became a police firearms instructor, the standard timing device was still the stopwatch or turning targets. As a competitive shooter, I realized the versatility offered by a shot timer and picked up a PACT Club Timer for about $100. It changed the way we trained, and officers soon began shooting better and faster because of it.

We could effectively measure the time it took an officer to solve a dynamic shooting problem. But, more importantly, we could isolate every aspect of an officer’s performance. We could tell how long it took him to get his first shot off, the time between the first and second shot — actually the time between any and all shots — and we could even see how long it took them to conduct a reload or solve a stoppage. The important part was not that the officer necessarily met a par time, but that with practice their times improved. With the shot timer, it could all be measured and you can do the same during your training. It really goes back to Cooper and DVC. Any attempt to sort out a problem with a firearm is nothing more than the measure of accuracy, power and speed. A shot timer lets you maximize your ability to balance this equation. Every portion of a second you save — while still maintaining accuracy with a powerful firearm — will increase your odds of survival. As Barrett Tillman, a Gunsite graduate and good friend of the late Colonel Cooper has said, “You will not rise to the occasion, you will default to your level of training.”

Can you draw your handgun from concealment, deliver a lethal shot on a human-sized target, at a distance of 7 yards, in 1.5 seconds? Can you draw and place two shots in the torso and one in the head in 3 seconds? Can you work to improve on these times and know you’re actually progressing? Can you do all of this alone, without the help of a training partner? There’s only one way to know for sure and only one tool that will help you do it: If you’re a serious shooter, you need a shot timer! 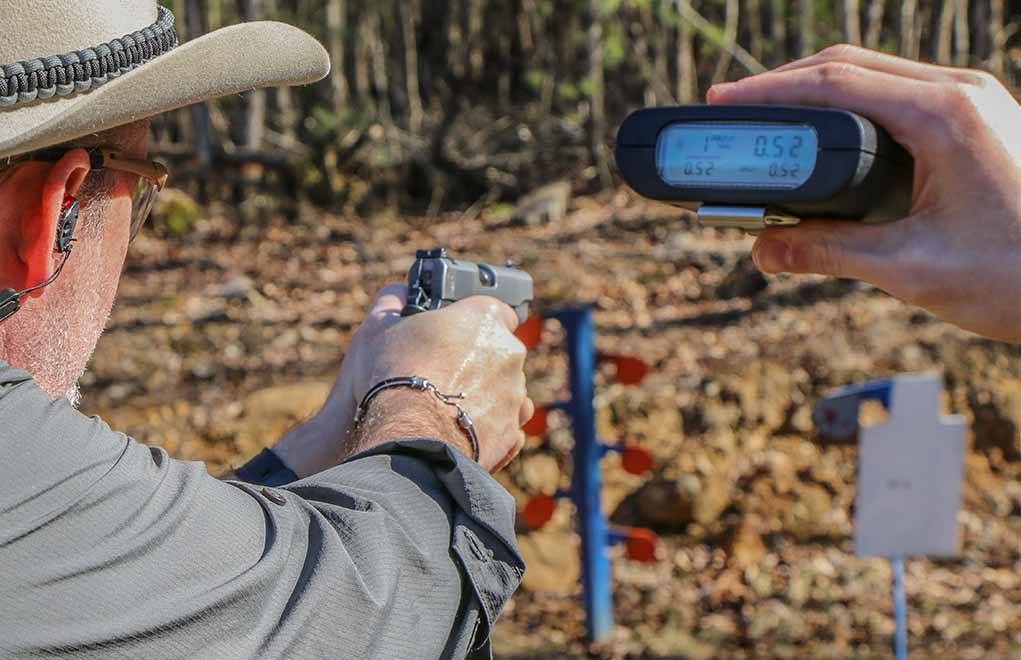 I typically rely on the PACT Club Timer. It tells me everything I need to know about my shot string at a glance. The shot number and total time are highlighted, with first shot and last split time displayed instantly at the end of a shot string. I can review individual shot times and splits, and the unit tells you if it’s set to delay or instant go. It’s designed to fit your hand and weighs 7.2 ounces. The microphone and buzzer are located on the side away from your hand, and it’s loud enough for even old gun writers to hear. All of the waterproof controls are recessed so there’s no chance of accidental activation. It has a suggested retail price of $129.95 with a lifetime warranty. I cannot imagine going to the range — or even conducting dry-fire practice — without it.