With new shooters getting into the game at an unprecedented rate, finding a gun range at which to shoot is probably one of the most common concerns in our ranks today.

Indeed, it’s a valid concern even for avid shooters looking for a place that’s a little more private, lets them stretch their long-distance skills or provides the right venue for competition training.

I recently moved, putting my favorite shooting range too far away to be a practical option. With a recommendation from a neighbor, I headed down to the local range closest to my new home. I figured I could quickly run some new ammo through a test pistol and snap a few photos for a GunDigest.com report. I thought wrong. It was a rifleman’s range, and a nice one at that, but handgunners were relegated to two small lanes off to the side. There were no options to change target distances, and waiting times between target changes were unbearably long. I left in a funk after emptying only two magazines. Was this my shooting future?

Back home, I did what I should have done in the first place: I searched for “shooting ranges” online. National Shooting Sports Foundation (NSSF) to the rescue—up popped NSSF’s site, WhereToShoot.org. If you haven’t visited, consider this an endorsement. Simply enter your zip code and pick a search distance. The site lists every range close by, including details on each one.
While the NSSF site isn’t alone in offering this information, it’s by far the most accurate and up-to-date. The information is available as an app for iOS and Android devices. That’s good to know for traveling hunters or shooters who need to locate a range at the last minute.

WhereToShoot.org helped me locate a mostly unadvertised range at a semi-private club about 20 minutes away. It was 10 miles farther than the first I’d gone to, but the drive was worth it. As I pulled into the parking lot, the first thing I saw was a covered handgun range with six lanes, unoccupied except for one other shooter and the range officer. I introduced myself, wrote out a membership check, and proceeded to shoot until my hands were sore. Life is good for the Modern Shooter. 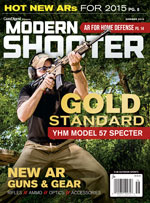