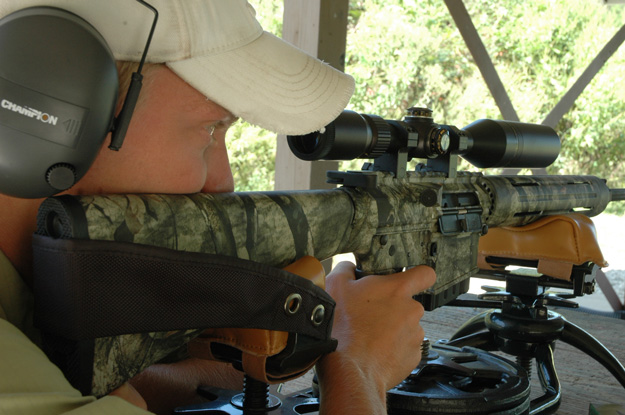 Built on an AR action, the Remington R-25 is the definition of the ‘Modern Sporting Rifle.’ In an attractive camo finish, it's an ideal varminter or target rifle.

When I was just a kid I remember my Uncle Jim – Dad’s younger brother – having a Class 3 firearms permit. He owned both a Colt M16A1 and an MP40 “Schmeisser” machine pistol. While the MP was interesting, especially to a 12-year-old, it was the M16 that attracted and held the lion’s share of my attention.

The fact he also owned a .22 rimfire upper receiver for the piece certainly helped; not only with the enjoyment factor, but more notably from a financial standpoint. It was a fun gun – nothing more, nothing less.

That was 35 years ago, and in the time between the Then and Now I haven’t so much as slipped a magazine into an AR-type rifle. This status changed recently, however, when I received Remington’s latest introduction – the Model R-25. Futuristic in appearance, the mottled green thing lay there in its hard case, ugly as a 1980 Chevrolet Citation.

I didn’t know whether to pick it up and fondle it, or poke it with a stick and hope for the best. Fortunately, and after the initial shock wore off, I resisted the urge to simply close the lid and wander away – and I’m glad I did, as I found what Big Green refers to as a “masterpiece of game-dropping performance that will load any camp’s meat pole with unrivaled efficiency” to be quite the shooter. Even if I do phrase it a little less dramatically. Available in .243 Winchester, 7mm-08 Remington, and .308 Winchester, Remington’s latest centerfire, the R-25, is a gas-operated AR-style semi-automatic rifle. All but the barrel and dust cover are cloaked in Mossy Oak’s ‘Treestand’ camouflage pattern.

In true AR Style, the R-25 consists of an upper receiver, which includes the bolt assembly and barrel, and the lower, comprised of the trigger group, magazine, safety, and bolt latch. Both upper and lower are milled from aluminum; the tubular hand guard is also aluminum, all of which help keep weight to a minimum.

The 20-inch barrel, with recessed crown, is fluted, and is wrapped at 5.5 inches back from the muzzle in a gas block cut with a 1.5-inch Picatinny rail, and secured by twin set screws underneath. The stock is made of a rugged Zytel plastic, with a .5-inch hard black plastic pad, and aluminum-doored cleaning gear compartment measuring 1 x 2 x 8.25 inches.

The pistol grip is cut from Zytel. The R-25 arrives sans sights; however, and in addition to the forward Picatinny rail, the upper includes a 6.75-inch Picatinny for scope or tactical optic mounting. Cartridges are fed via a supplied four-round magazine; however, the company website does state that any DPMS (dpmsinc.com), a sister company to Remington, .308 Winchester-style magazine is compatible. Mind you, my meeting with the R-25 is, for all intents and purposes, my first introduction to firearms of this nature during my adult life. As you might have picked up on via my scribblings here in Field Gun Review, I’m somewhat of a traditionalist when it comes to weaponry, especially in terms of aesthetics. That is, I want the gun to look as good as it functions. And while this may be subjective, I’m just not used to this new style of rifle. This said, don’t hate me when I refer to the R-25 as homely. I think she would look much better draped in her original black finish; however, I’m sure it was Remington’s intent to take the Black Rifle label. To some extent, they’ve succeeded in creating an Old School camouflaged autoloader wearing radically new clothes. It’s a case of semantics, or at least it is to me. Regardless, I don’t find the R-25 aesthetically pleasing; some might, I don’t. Still, good looks don’t consistently kill whitetails or hogs or coyotes or antelope or what have you. Accuracy and reliability do, and in this arena, the R-25 is stunning.

Filled with Remington’s 75-grain Accutip-V Boattails, and topped with an Alpen APEX 6-14x44SF cranked up to 10x, the .243 version I tested printed an amazing .625-inch group at 50 yards. Not three shots or five shots, but 10 rounds split evenly between two shooters into a ragged cloverleaf just barely 5/8-inch from center to center. Groups did open up a touch at 100 yards; still, all of our three- to five-shot clusters measured between 1.25 and 1.5 inches. I wouldn’t hesitate to pull the R-25 from the cabinet and carry it afield for anything from whitetails to coyotes.

While we’re on the topic of carrying things, the R-25, at 11.5 pounds, 19 ounces of which is scope, isn’t meant to be toted for very long, or at least I don’t want to pack it around the hills of western Washington in search of blacktails, black bears, or for that matter, blackberries. Plainly put, it’s heavy.

That said, if you’re of a mind to sit in a box blind, ground blind, or treestand, then it doesn’t matter. On a positive note, the R-25 is exceptionally easy to break down for routine maintenance, as are all the members of the AR family. As is often the case upon receiving a new anything, my initial move is to take it apart and then, hopefully, put it back together. Doing so with the R-25 is amazingly simple. Push two pins, and the upper and lower receivers separate. From this point, it’s a truly simple matter to reduce the weapon’s innards to individual parts, clean thoroughly, and reassemble.

Running anywhere from $1,350 to $1,500 retail – and that’s before you begin the addictive process of buying and attaching aftermarket gadgets and gizmos – the R-25 makes, in my humble opinion, for a rather spendy deer rifle. However, the weapon doesn’t falter in the field accuracy department, nor in terms of reliability. And as far as getting noticed when you pull it out of the case at this year’s Upper Midwest deer camp – well, there should be no shortage of “interesting” comments.