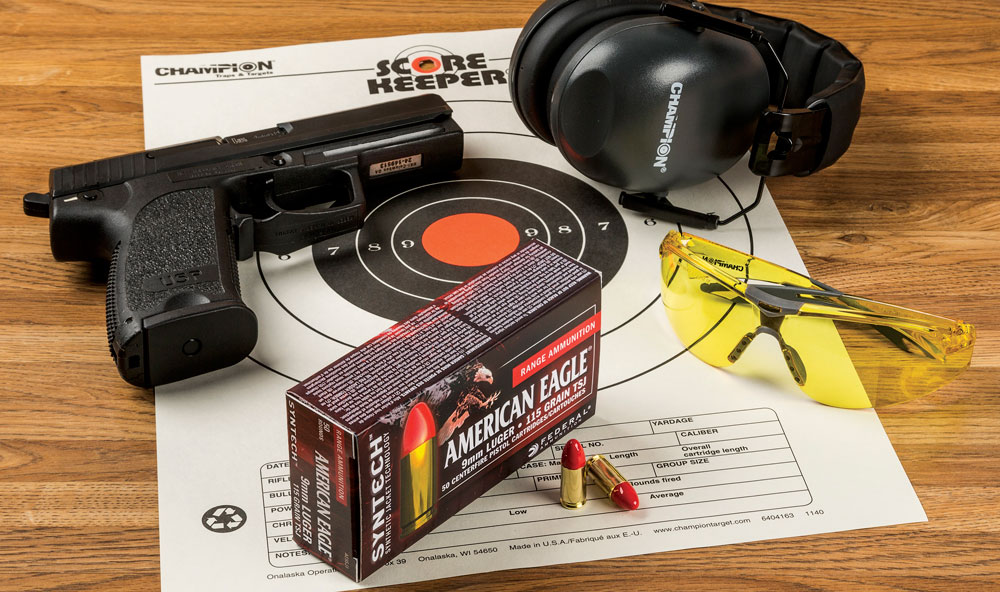 It’s one of the biggest ironies in shooting. We generally put the least amount of thought and consideration into the handgun ammunition we shoot the most: Target rounds. Shooters might research and test several different loads for personal defense, hunting or competition, but when it comes to a day at the range, most are content to shoot whatever’s available and affordable.

Consciously or not, we rationalize that we’re “only” shooting at paper or steel from relatively close range, and that the practical differences between full metal jacket target rounds have traditionally been subtle at most.

But that’s all changed. New American Eagle Syntech™ shows what target ammunition can really be. Smooth. Consistent. Clean. Easier on your gun. And more fun to shoot.

“We’re proud of the consistency and performance our target loads have always offered, but we didn’t just want to follow the industry, hit a certain plateau, and stop striving for something more. So we stepped up and asked ourselves what we could do to make the shooting experience better.” The changing demographic of today’s shooter was another important motivator.

“We know that someone who started shooting a handgun in the past few years generally has different wants and needs than established shooters,” Holm said. “In a lot of ways, they’re more critical and do more research. They ask questions that push us to do more too, especially for those who might not be quite as comfortable with guns or do most of their shooting at indoor ranges.”

Engineers tackled these varied challenges head-on while developing Syntech, and in the process created something extraordinary—not only the ammunition itself but also the technologies that define it.

It all centers on the exclusive Syntech Total Synthetic Jacket, a complete polymer coating that takes the place of the copper jacket in conventional FMJ target ammunition. The technology rewrites the book on what shooters should expect and demand from range ammunition.

Syntech is cool—literally. Unlike conventional lead or copper-jacketed rounds, the slick, red polymer coating eliminates metal-on-metal contact in the barrel. The result is not only softer, smoother shooting you can feel, but less friction, heat and barrel wear. Shooters—especially those who burn through a lot of rounds at the range—will get more longevity out of their hard-earned handgun investment.

The next thing a shooter will likely notice after putting a few magazines of Syntech through their gun is actually what they’re not seeing—copper or lead fouling.

“We don’t like to admit it, but nobody likes to clean their gun, and Syntech eliminates a big part of what makes a firearm dirty in the first place,” said Senior Product Development Engineer John Swenson. “Not only does the Syntech jacket encapsulate the lead core, but that coating maintains its integrity at ignition, down the barrel and in flight.” With no exposed lead or copper, there’s no contact between these materials and the barrel, so there’s no metal fouling. Period. You’ll have to service your gun less frequently and you’ll shoot better in the meantime.

The need to clean is further reduced by the loads’ special clean-burning propellant paired with all-new lead-free Catalyst™ primer technology.

“The new primer is hot, consistent, and provides extremely reliable ignition,” said Chief Chemist Joel Sandstrom. This results in a more complete and efficient burn of the propellant, which significantly reduces residue with each shot.

Range shooters often take for granted the physics involved in shooting a jacketed bullet into a hard target mere paces away. The reality is that pieces of the copper jacket and larger fragments of the lead core travel far from a target on impact—sometimes more than 15 yards. But with no hard copper jacket and a soft lead core, Syntech produces less of this splash back, and what it does produce travels shorter distances when fired into steel targets. Testing done by Federal Premium engineers proves this point.

“We set up a test where a shooter fired 100 rounds each of common, commercial, 115-grain FMJ, TMJ and Syntech from a distance of 23 feet into a steel target,” Swenson said.
For the test, Swenson and his team covered a 15-plus-yard radius in front of the target with a giant tarp, on which they’d marked 5-, 10- and 15-yard circles. After shooting each type of ammunition, they collected bullet fragments in the 10- and 15-yard marked areas, and weighed and analyzed what was there.

“What we found says it all,” he said. “Not only did Syntech put out less overall weight in recoverable fragments than typical FMJs, but most of those fragments were smaller and traveled shorter distances after hitting the steel.” There will always be practical applications for conventional copper jacketed target rounds like those you’ll find from American Eagle. This ammunition remains an affordable choice for accurate, reliable practice and training. But with range time so precious to us, it only makes sense to choose ammunition that makes that time more fun and more productive, with less hassle and cleanup afterward.

“It’s all about having a better shooting experience,” said Holm. “With Syntech, you have it—more of what all shooters want, and less of what you don’t.”

Q: What is Syntech ammunition?
A: American Eagle Syntech features an all-new Total Synthetic Jacket (TSJ) wrapped around a soft lead bullet, plus the high-performance, lead-free Catalyst™ primer and specialized clean-burning powder packed in a reloadable brass case. The combination reduces heat, friction and fouling to keep your gun cleaner, longer while providing the smoothest, most enjoyable shooting experience possible.

Q: How does it keep your gun cleaner?
A: Unlike conventional jacketed ammunition that causes metal-on-metal contact between the bullet and bore—decreasing barrel life while producing hard-to-clean fouling—Syntech’s polymer coating lets the bullet glide through the barrel. As a result, barrel life is extended, while lead and copper fouling are a thing of the past.

Q: Metal residue is gone, but what about polymer fouling in the barrel and rifling?
A: After firing many thousands of evaluation rounds during exhaustive testing, we’ve noticed no substantial residue from the polymer coating.

Q: Do you need special cleaning products when shooting Syntech?
A: No. We’ve fired thousands of Syntech rounds during testing, and no specialized cleaning products have been necessary. Thanks to Syntech’s TSJ jacket, traditional cleaning products such as a brass brush and standard powder solvents should be all that is required to clean your barrel/firearm.

Q: How does the Syntech coating differ from the red moly used decades ago?
A: The red molybdenum grease other companies coated their bullets with is completely different than Syntech’s strong and durable polymer, which is neither liquid nor grease.

Q: With less friction and heat, how does the Syntech coating affect bullet velocities versus standard full metal jacket ammunition?
A: We designed Syntech to perform at velocities similar to current conventional range loads. However, because the coating reduces barrel friction, we are able to achieve this velocity with a slightly lower powder charge. Q: Will the coating degrade when my barrel heats up from high-volume shooting?
A: We did not experience that issue while firing thousands of rounds during development.

Q: Will there be any Syntech personal defense or rifle rounds available in the future?
A: Although Syntech was initially designed as high-performance range ammunition, we will look to create, evaluate and test other products in years to come.

Q: How long has Syntech been in the works?
A: It took approximately four years to release this product, including two years of just developing the sophisticated machinery required to reliably mass produce such high-quality bullets. However, Federal Premium® has decades of experience with coated bullets, and we relied on this expertise to develop Syntech and deliver its high-tech features and benefits at an affordable price point.

Q: What exactly is the polymer formula used in Syntech and how is it applied?
A: Sorry, we can’t answer this question. It's a trade secret. However, we can say sophisticated machinery precisely applies the Syntech polymer to meet our rigid specifications—after which the coated bullets undergo an extensive series of quality assurance checks.

Q: What is the cost difference compared to standard FMJ range ammunition?
A: While Syntech is competitively priced for the range ammunition market, you might find it retails a bit higher than standard target rounds. However, the benefits Syntech delivers more than offset the slightly increased cost. Q: How does the Catalyst primer give this new ammunition an edge?
A: The all-new, lead-free Catalyst primer used in Syntech rounds is hot, consistent, and provides extremely reliable ignition followed by efficient burning of the propellant. We believe Catalyst is the most state-of-art primer technology available.

Q: How does Syntech ammo appeal to new shooters?
A: We know that someone who started shooting a handgun in the past few years generally has different wants and needs than established shooters. New shooters are typically more intimidated when it comes to cleaning their handgun or shooting at indoor ranges. They might also worry about protecting the barrel on their new investment, or be more concerned about safety issues such as splashback when shooting close-up steel targets.

Q: Explain how Syntech reduces splashback.
A: Since Syntech lacks a conventional copper jacket and has a soft lead core, it produces significantly less splashback than standard full metal jacket ammunition when fired into steel targets. Testing by Federal Premium engineers revealed Syntech produced much less total recoverable fragment weight than FMJ rounds between 5 and 15 yards of the steel target. And significantly less beyond 15 yards.

Q: Is Federal’s Nyclad bullet similar to the new Syntech product?
A: Polymer-based Syntech target ammunition is a totally different product than our nylon-based Nyclad, which was developed primarily for law enforcement purposes. That being said, engineers working on the Syntech project certainly benefited from the years of experience in coated-bullet technology we’ve gained while producing millions of rounds of proven Nyclad ammunition in the past.