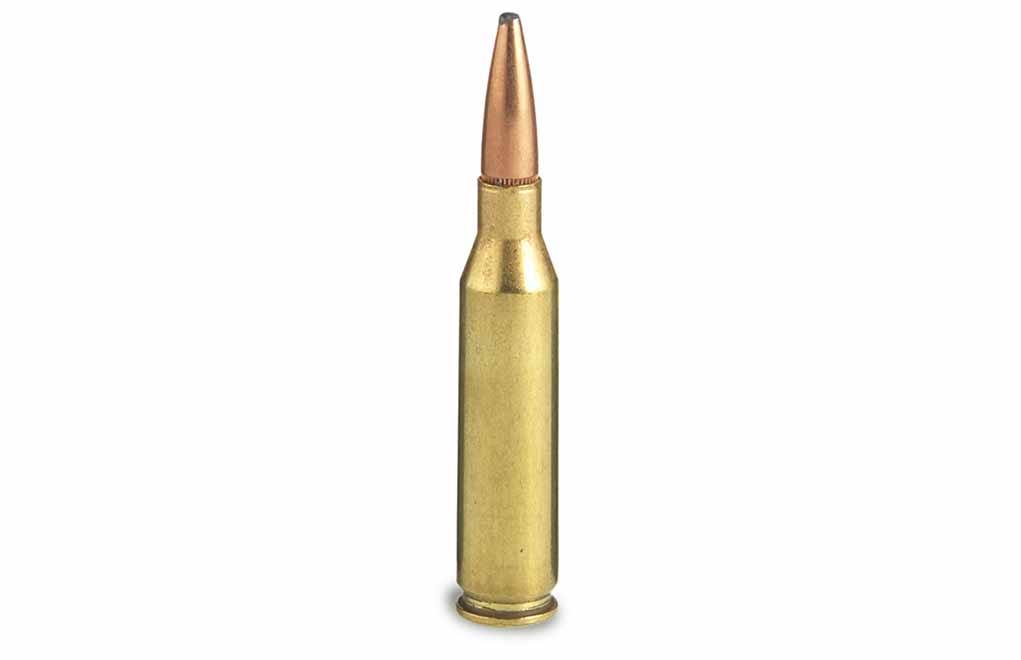 Remington introduced this medium-capacity rifle cartridge to the marketplace in 1980. The 7mm-08 Remington is based on the .308 Winchester case necked down to 7mm and was loaded with a 140-grain bullet at 2860 fps.

Why the 7mm-08 Remington is a top short-action choice:

Remington advertised this cartridge as the “… first modern 7mm round designed for use in short-action rifles.” This is an interesting claim, in view of the fact that the .284 Winchester, designed for the same purpose, arrived on the scene in 1963. Furthermore, the 7mm-08 is a direct copy of the 7mm/.308 wildcat dating back to 1958 and earlier. This is not meant to denigrate a fine cartridge, but to demonstrate that there really sometimes isn’t much new under the sun, despite advertising claims. The 7mm-08 is chambered in exactly the same actions as the .284 Winchester, but cannot equal .284 ballistics.

Original rifles chambered for the 7mm-08 were the Remington Model 788 and 700BDL Varmint Special bolt actions. Current Remington catalogs list the 700 series and Model Seven bolt-actions as available in this chambering. Other makers have also chambered it.

Remington has hung its hat on the 7mm caliber, and with considerable success. It now offers six chamberings: 7mm BR, 7mm-08, 7x57mm Mauser, 7mm Express (.280 Remington), 7mm Remington Magnum, and 7 STW. The 7mm BR originated as something of a semi-wildcat based on the .308×1.5-inch necked down. Remington has contributed more than any other company to the belated recognition of the ballistic advantages of the 7mm caliber by U.S. shooters.

Owing partly to a more pointed bullet shape, the 7mm-08 140-grain load surpasses the .308 Winchester 150-grain load downrange, according to Remington tests from a 24-inch barrel. This appears to be true. At 500 yards, the 7mm-08 bullet has an edge of 238 fps and 750 ft-lbs of energy over the .308 bullet. This would make quite a difference in potential killing power and also help in better bullet placement at unknown distances. There is not sufficient difference to cause owners of .308-caliber rifles to rush down and trade them off for 7mm-08s, but it does illustrate the ballistic advantages of the smaller caliber loaded with more streamlined bullets.

The 7mm-08 is a great favorite with many metallic silhouette shooters, and there are many glowing reports regarding its accuracy on the range, particularly with handloads. It is also building a good reputation as a long-range deer and antelope cartridge. When handloaded with bullets heavier than 140 grains, it is also suitable for heavier game, such as elk. Unfortunately, the two factory bullet weights do not make for a very flexible big-game cartridge. On the other hand, by handloading, this cartridge can be adapted to anything from varmint shooting through elk.

Case capacity of the 7mm-08 is slightly less than the 7x57mm Mauser, and performance with the heavier bullets of around 175 grains is about 100 to 150 fps less, which is not anything to get really excited about. The fact of the matter is that the 7mm-08 is adequate for most North American hunting, though handicapped by only two commercial bullet loadings. Remington has been joined by Federal in offering factory loaded ammunition in this caliber.