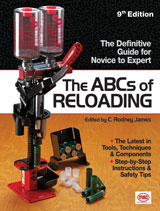 Creating homemade shotgun loads is not the same  as metallic cartridge reloading. It requires different tools, components and knowledge. However, of the three basic types of ammunition, shotgun ammunition is perhaps the easiest to load, once you get the hang of it. Nevertheless, care and attention must be given the task if good results are to be obtained.

Whether the results you get are “good” or “bad” depends on what you were trying to do. In ABCs of Reloading, author C. Rodney James points out several problems that you can't blame on the loads, and goes on to dispel a few “false notions and home truths” about shotguns and shooting.

Good loads are the ones that do what you want them to do and often the bad load is one that does not. This may be because it is inappropriate to the situation — too small shot, too light a load, not enough pattern density. These problems are rooted mainly in the ignorance of the shooter and in taking shots that he should not attempt and then blaming the gun or the ammunition. There are, however, a few false notions and a similar number of home truths that should be addressed.

Larger-bore guns hit harder. Not true. The velocity of all shotgun loads is virtually the same — in the 1200-1500 fps velocity. A #6 pellet from a 410 is flying as fast and hitting as hard as one moving at the same velocity from a 10 gauge even though the 410 makes less noise.

The same-weight load from a 20 gauge and a 12 gauge are equally effective. This tends not to be the case. Longer shot columns tend to result in greater compression-distortion of the pellets at the back of the load and thus produce more fliers and consequently a less dense pattern. This probably is what led to the notion of larger bore guns “hitting harder.”

Harder shot hits harder. Not really, but hard and extra-hard shot, because of its being less distorted and having a smaller percentage of distorted shot in a given charge, delivers more shot to the central pattern with fewer fliers. Heavy loads, particularly in the 410 and 20 gauge 3″ shells and the 12 gauge 3 1/2″ magnum with their longer shot column, are most effective with hard shot.

Certain powders do not perform well at sub-freezing temperatures. This seems to be true, according to the Fackler brothers at Ballistic Products, who ran tests on powder performance and concluded that Blue Dot gave significantly lower velocities at low temperatures, much more so than other powders, although all velocities will be lower in cold conditions when the air is more dense.

High-velocity shotshell loads have some fans who believe that by pumping the velocity up to 1500 fps there is something to be gained by getting the shot to the target faster. More pressure and more recoil top these gains unless the shot charge is reduced. At the velocity top-end, patterns get pretty ragged. Around 1400 fps, however, patterns hold well and at ranges of 25 to thirty yards are quite lethal. Unfortunately this added lethality is at the price of tearing up what is shot to a greater extent than with more modest velocities. This is a plus in the varmint-shooting area, not so good for pot hunting. Do these loads really “reach out there and get ‘em?” Not really, since pellets are very poor performers in the aerodynamic sense and the initial gain in velocity is soon shed and at 45+ yards are not going to perform much differently than the standard factory loading. If the velocity is achieved at a reduction in the amount of shot, things are a little worse because of a lower-density pattern.

The main advantage of such hot loadings would appear to be in trap and skeet shooting where the targets are at relatively close range. Hard hitting assures more breakage and higher velocities cut lead calculation in this game of hitting them fast and hard.