So many guns and ammo and optics and more at the SHOT show, so little time! Here are my top picks from the first day at the firearms industry's biggest trade show.

I and the rest of the staff at Gun Digest are taking a break from our usual posts, as we hoof it up and down the bazillion aisles of SHOT show this week, taking place in Las Vegas. For those of you who don't know what SHOT show is, it's the firearms industry trade show, one of the biggest trade shows of any kind. SHOT, in fact, stands for Shooting Hunting Outdoor Trade show, and it's run by our spokes-group, the National Shooting Sports Foundation (NSSF).

Every January, this four-day show brings FFL holders, wholesalers, marketing and PR folks, and us media types together to see everything new from manufacturers of everything from sleeping bags and kayaks to layout blinds, decoys, guns, ammo, deer pee, scopes, knives, camo, clothing, and more than I can possibly list here. The show opened today. And I found more than a few cool items but here's one that stood out from the bunch.

Merkel has never been a brand that's been much on my radar screen. Oh, they absolutely make top-notch guns, just cracker good, with superb craftsmanship and lots of custom options, particularly engraving from some of the world's most renowned artisans. But, as you might guess from the name, these guns have a distinctly Germanic styling to them, and I have a preference for the lines of British Best firearms. Plus, Merkel's guns have been and probably always will be out of my price range.

Regardless, I was swinging by the Merkel booth today and saw a good friend of mine and a former colleague from when we both worked at the NRA, Mike Nischalke, was there, so I stopped. Come to find out, Mike is the PR rep for Merkel and Steyr Arms, among other brands. Anyway, we got to talking, and he showed me what Merkel's billing as the world's fastest bolt gun. I kind of th0ught, Sure, whatever, a bolt's only as fast as the operator moving it, and then he showed me why — and he wasn't fibbing one bit. More to come on that gun. 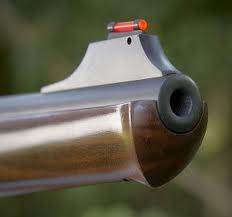 In the meantime, I do have pics of a different Merkel that's absolutely worth checking out. The K3 single-shot (above) is available in a traditional stock, but the one that drew my attention was the Mannlicher version. This is a funny stock style, one you either love or hate, and often depending on the overall length of the gun. I've always liked Ruger's No. 1 with a Mannlicher stock, for instance, but Sako used to (and may still) make a really long stocked Mannlicher that just always looked awkward to me. The Merkel K3, though, is unlike any of them.

With an overall length of just under 36 inches, the gun almost looks like a scaled down toy or model version of a full-size gun. Mike handed the little rifle to me, and I expected the gun to just smack my cheek — a typical problem with a too-short gun — and for my forearm to reside in a less-than-normal postion, one probably far out on the stock, to compensate for the perceived overall shortness. I ended up experiencing neither problem. I gently “snapped” the gun to my shoulder, and was actually startled to find what I can only describe was a perfect fit. I didn't even have to press my cheek to the stock to have the sights line up. I mounted the gun again. Same thing. Perfection.

Now, I think part of this had to do with the sight design. The front “bead” is a red fiber optic pin. The rear V-notch leaf sight has three day-glo yellow dots, one at the top of each side of the V, one at the bottom of the V. When I brought the gun to shoulder, the red dot was just, just there, neatly resting precisely and wholly between the two yellow side dots and on top of the singular bottom yellow dot.

I tried to mount the gun and torque my body so that the sights wouldn't align — couldn't do it. Could. Not. Do. It. Even better? I could completely keep both eyes open, remain focused on the red front sight “dot,” and not see the cross-eyed duplicate you usually get when trying to do that maneuver.

The Merkel K3 weighs an astonishingly light 5.5 pounds without a scope on it–and given the way the sights line up, you may not have to put one on. Hiking into the back country and want to trim weight? This gun is it. Have the occasion to shoot at running game? This gun is it. Want a gun that sets you apart from the crowd? Wow, is this gun it. Available in a wide variety of regular American calibers, like .243 and .30-06, there are also some outside-the-box choices, such as the 30R Blaser and 8x57IRS. Check it out at www.merkel-usa.com.